Weather Discussion for Wednesday May 19, 2021

This blog will be issued every Monday, Wednesday, and Saturday morning and updated if the weather is changing or critical or interesting weather events are occurring.
A low pressure trough will move across Northern California later today and Thursday and will end up over Central and Southern Nevada Friday.  This system doesn't have much moisture with it but should trigger a few showers and thunderstorms over the foothills and mountains later today and Thursday.  There is a slight chance of an isolated shower in the north end of the valley.  Friday there will be a few showers over the higher elevations north and east of the valley. Partly to mostly sunny skies will occur elsewhere.  Snow levels will be near 6000 feet on Thursday. Precipitation amounts will be light.  Temperatures today through Friday will be below normal with Thursday being the coolest day.  Gusty northwest winds will occur later today through midday Friday.
Late Friday  the low will be drawn northward by a low pressure area that will be approaching the Canadian coast.  Saturday there will be isolated showers over the mountains north and east of the valley, with partly sunny skies elsewhere.  Temperatures will warm but still be below normal.  Sunday looks partly mostly sunny with near normal temperatures.
Monday afternoon and Tuesday a weak low pressure area will move across the north state.  This system could trigger scattered light showers and possible thunderstorms mainly over the higher elevations.
Wednesday through the end of the week high pressure returns for sunny skies and above normal temperatures.
The Old Forecaster
Click here for latest infrared satellite picture
Click here for latest Cal Trans Chain Control
CALTRANS traffic cameras  Try this link
Click on the images below to make them larger... 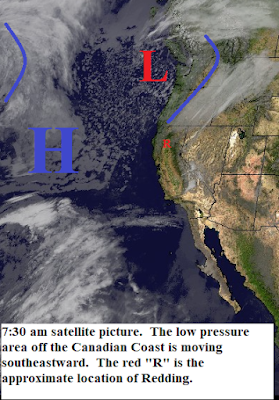 Posted by old forecaster at 7:53 AM