This blog will be issued every Monday, Wednesday, and Saturday morning and updated if the weather is changing or critical or interesting weather events are occurring.
Today will start out mostly sunny but the Northern and  Eastern sections of the north state will see a few clouds in the late afternoon and evening as a low pressure area drops from Canada toward Nevada.  Temperatures today will be slightly cooler.  Gusty northwest winds are expected.
Tuesday through Wednesday the low will be over Nevada (see map below).  This system doesn't have much moisture since it formed over the inland areas of Canada.  However, the weather along and east of the Sierra Cascade Crest will be totally differed than the weather west of the crest.  Tuesday and Wednesday along and east of the crest skies will be partly cloudy to cloudy with isolated light showers.  Temperatures will be below normal.  Gusty northeast to east winds are expected.  West of the crest will be mostly sunny with scattered clouds.  Temperatures will be near normal.  Strong and gusty northeast winds are expected.
Thursday the low will be moving eastward.  Skies will be mostly sunny and warming will occur both east and west of the crest.  Gusty northeast to east winds will continue.
Friday through at least the mid part of next week high pressure will be back over the coast.  Clear skies and above normal temperatures.  Winds will be decreasing Friday and light by Saturday and weekend.
The Old Forecaster
Click here for latest infrared satellite picture
Click here for latest Cal Trans Chain Control
CALTRANS traffic cameras  Try this link
Click on the images below to make them larger... 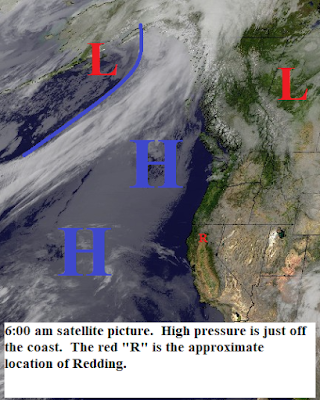 Posted by old forecaster at 6:47 AM