This blog will be issued every Monday, Wednesday, and Saturday morning and updated if the weather is changing or critical or interesting weather events are occurring.
The frontal system that brought rain to the area during the night is now moving eastward.  Skies will be partly cloudy today with a few showers over the foothills and mountains.  Snow levels will be 3000 to 4000 feet north and a little higher south.
The low pressure area currently in the Gulf of Alaska (see satellite picture below), is dropping southeastward and will be off the Northern California coast late Monday and early Tuesday (see map below).  This low will continue southward and move into Southern California late Wednesday.   Sunday starts off partly cloudy with isolated mountain showers and then a frontal system will move across the north state late Sunday and Monday.  This system will bring rain and showers to Northern California with snow levels 2000 to 3000 feet.  Tuesday and early Wednesday the low will push more showers over the north state.  Snow levels will remain 2000 to 3000 feet.
Skies will clear late Wednesday as high pressure redevelops along the coast.   Thursday through the weekend look mostly clear with temperatures back above normal by Friday.  Gusty north winds will occur Wednesday night through early Friday.
The Old Forecaster
Click here for latest infrared satellite picture
Click here for latest Cal Trans Chain Control
CALTRANS traffic cameras  Try this link
Click on the images below to make them larger... 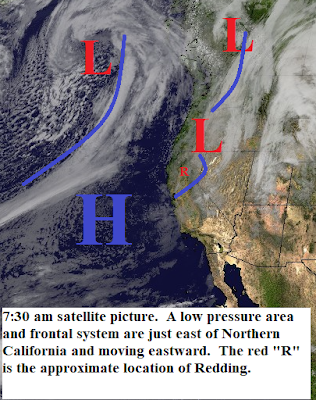 Posted by old forecaster at 8:16 AM